Forget Apple, Amazon, or Google. Meet Haier. Together with Boundaryless, members of the UK Chapter of the European Organization Design Forum reflected on how to bring Haier’s ecosystem-centric management model into more European firms.

Forget Apple, Amazon, or Google. Meet Haier. This is the title of the event organized on the 10th of March by the UK Chapter of the European Organization Design Forum through which Emanuele Quintarelli, 3EO Micro-Enterprise Lead at Boundaryless, had the chance to introduce tens of organization design leaders and practitioners from multiple European countries to the RenDanHeYi.

In addition to bringing all the participants up-to-speed with Micro-Enterprises, Ecosystem Micro-Communities, Industry and Shared Service Platforms, the meeting addressed some deeper questions for fully understanding and trying to bring Haier’s ecosystem-centric management model into more European firms.

This post collects some of the nuggets that emerged.

To know more about the RenDanHeYi, consider joining the upcoming free webinar, The RenDanHeYi in practice. Voices from the world, for the first major release of our 3EO Toolkit and hands-on experiences from companies spanning 3 continents on June 21st at 2 PM CEST and booking your seat for the 3EO / RenDanHeYi Masterclass. 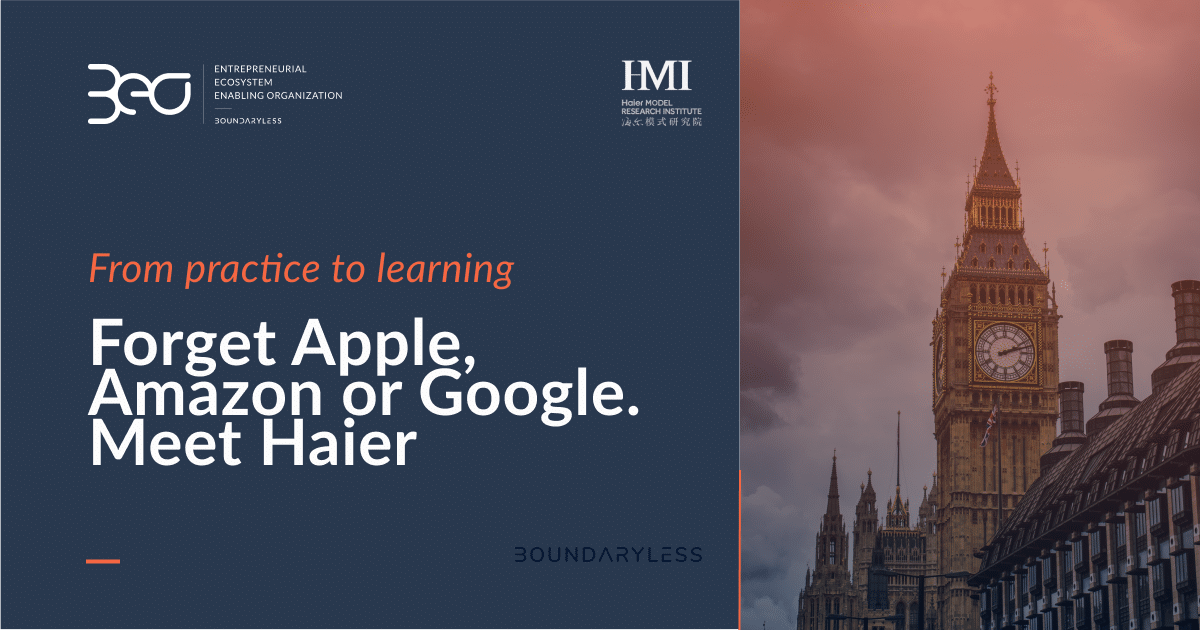 What is the unique contribution RenDanHeYi brings?

Through the question “Is the RenDanHeYi about 1000 thousand independent teams or a single company?” the group looked at the different stages of Haier’s evolutionary trajectory touching upon Micro-Enterprises and eventually Ecosystem Micro-Communities.

In addition to culture loosely aligning the activity of large groups of colleagues as it happens in many flatter, organic, less hierarchical pioneers, EMC Contracts and Industry Platforms have been suggested as the enabling constraints that support direction and guarantee (a messy, not a perfectly neat) coherence among an otherwise fully distributed and autonomous human system. Incentives, such as user-paid salaries and value-sharing between nodes, have also been posited to attract entrepreneurial individuals and nudge them to cooperate around above-average consumer benefits.

This unique peer-to-peer, contract-based, emergent, customer-centric collaboration mechanism, absent from most other progressive management experiments, breaks down silos and removes traditional management for a leaner, more adaptive, and scalable business.

What role will software play in the future of organizing?

Growth of value without a proportional growth in bureaucracy has also been explored from a software angle. Starting from Haier’s EMC Workbench (the technological application used in China to help micro-enterprises enter into collaboration agreements), a quick description has been given of the most relevant use cases the EMCOs project and software intend to address: order-bidding dynamics on new Micro-Enterprises and EMC contracts, value flows and sharing, individual and team reputation, investment contracts (VAMs), etc.

Considering the RenDanHeYi as a representative, a specific instance, of a more generic fractal model of the organization with a given set of properties (e.g., having an owner or profit-sharing) that can be freely configured for nodes (e.g., individuals, teams, units, etc.) at an infinite number of organizational levels (e.g. teams may have subteams), the EMCOs will both provide a direct solution for the implementation of a Haier-like organizational design and aid other schemes that would better fit in specific cultural and business contexts (e.g., more or less flat organizations). This quick introduction provided a call to action for participants to consider joining the alliance that will work on implementing and launching the EMCOs.

Is Haier’s model only applicable to for-profit firms?

The applicability of the principles and ideas brought by the RenDanHeYi to the public sector and no-profit firms is yet another recurring topic that emerged at the event. This is not an easy-to-answer request, especially considering the significant distance between Haier China’s history, trajectory, and goals and what governmental organizations may experience.

One particular idea shared with the designers attending has been seeing profit as but one of the many forcing functions to guide action in micro-enterprises. Examples such as Zappos in the USA and MAQE in Thailand already offer proof of the chance to introduce a three-pronged approach for measuring value. Whether we want to call it the Triangle of Accountability as Zappos did, or the Trinity as in MAQE’s case, dimensions such as patient/citizen/consumer satisfaction and employee engagement can be added to financial outcomes as indicators of the multiple, not-necessarily financially related, returns entrepreneurial team could generate.

A second idea for letting the RenDanHeYi be more palatable in less dynamic and competitive environments is the larger attention Zappos gives to members of autonomous teams and team leaders/owners. Balancing both responsibilities for innovation and execution through gradual transformation attempts could reduce the barrier to entry and attract the attention of firms in which most employees still struggle to conceive themselves as leaders.

The need for transparency and collaboration at the CIA, US Central Intelligence Agency after 9/11, represented the opportunity to discuss how the Haier’s intrinsically open, transparent, and boundaryless approach to business data, opportunities, and collaboration could function even in those companies historically used to restrict and control the actors with access to privileged information.

In an ecosystemic and platform-supported space, seeking chances for attracting, including, and interacting with thousands of partners, customers, and even former competitors appears the first step toward unprecedented competitive and adaptive advantage sources.

Taking inspiration from Haier and introducing some of its patterns in European ventures has been a final subject of the event. During it, the role of charismatic leaders, such as RenDanHeYi founder Mr. Zhang Ruimin, the influence of culture and values, but also the need of an appropriate and realistic transformation process came to the front.

Learning about Fujitsu’s journey with its 14 micro-enterprises launched and successfully reaping benefits in West Europe in less than 1 year, the group gained confidence about the possibility to achieve similar results through the agile, iterative, experimental, and emergent evolutionary approach that Boundaryless is currently testing in the market and describing in the upcoming 3EO Toolkit – Adoption Guide.

More than as a precise target operating model through it, the RenDanHeYi is introduced as a perfect but never seen before example of massive, strategic experimentation that gives both the organization and its stakeholders concrete ownership of innovation, customer value, and their own satisfaction.

Are you into future-proof organization design concepts, techniques, and tools?

Join us at the upcoming 3EO / RenDanHeYi Live Masterclass in September: 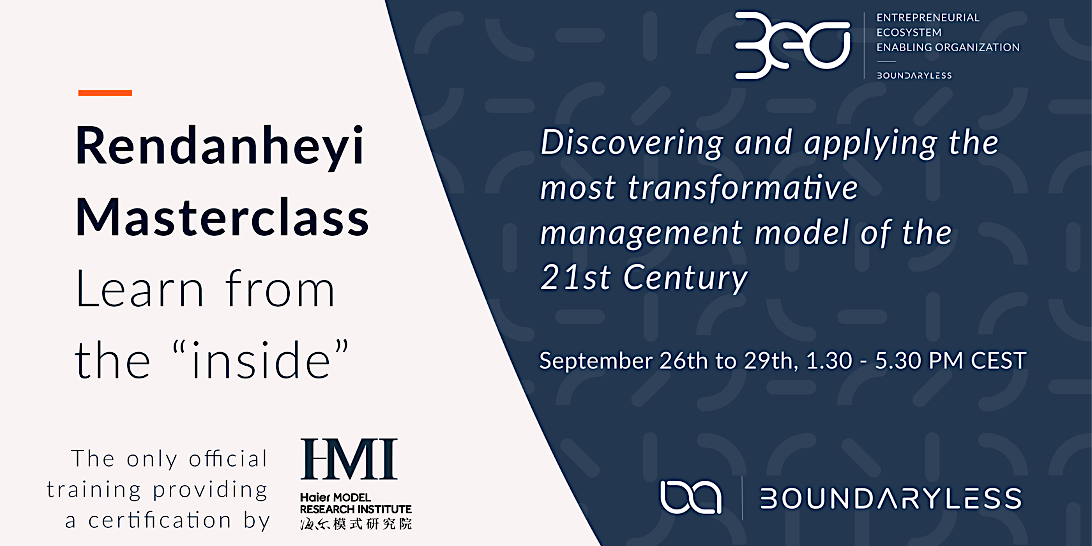 As you may know, everything we do is released in Creative Commons for you to use. If you’re getting value out of these reads and tools, we encourage you to share with your friends as this will help us get more exposure and, hopefully, work more on developing these tools.

Get help in exploring and designing entrepreneurial and ecosystemic organizations

Contracts and the Future of the Firm

How ubiquitous contracting can speed up the crisis of the Industrial Age Bureaucracies.

How ubiquitous contracting can speed...

Converging towards a Common Protocol of Organizing

Why the Entrepreneurial Ecosystem Enabling Organization may be a breakthrough in organizational development. In this essay, we will go through...

Why the Entrepreneurial Ecosystem Enabling...

An outline of EEEO’s key aspects and explain why this organizational approach appears to be a better fit to the...

An outline of EEEO’s key...

Patterns for a RenDanHeYi evolution from Spain

Talking to the HR community in Spain, Haier’s example of moving toward a more adaptive, ecosystemic, and innovative firm raised...

Talking to the HR community...

Based on a conversation with more than 10 firms from Latin America, this post explores distinctive traits of Haier’s experience...

Based on a conversation with...