Towards Modular and Composable Markets

Understanding how markets are increasingly being shaped by composability is definitely a hot topic today. In this essay, that nicely connects with an earlier essay we wrote on Composability and Organizations hthat we suggest the reader to catch-up with as we reference to some of its contents, we explore what increased market modularity and composability means for organizations in terms of identifying value propositions, changing inner working dynamics and more.

Understanding how markets are increasingly being shaped by composability is definitely a hot topic today. It was not later than September last year that Gartner published the “Becoming Composable: A Gartner Trend Insight” report and platform thinking legend and Boundaryless’ friend Sangeet Choudary recently came up with his “Building Blocks thesis” that takes composability as the pivotal element of evolution in envisioning the future of markets. In this essay, that nicely connects with an earlier essay we wrote on Composability and Organizations (that we suggest the reader to catch-up with as we reference to some of its content), we explore what increased market modularity and composability means for organizations in terms of identifying value propositions, changing inner working dynamics and more.

Subscribe to our newsletter if you don’t want to miss a thing!

A few weeks ago, I had the chance to write a preliminary essay  focusing on exploring how DAOs and Web3 generally increase the need to factor in composability and modularity in an organization’s future strategy. DAOs pioneer new ways of thinking about organizing and products in ways that will become much more commonplace in the short future: in the end DAOs are organizations, and not just toys for millennials and zoomers, and the new developments we’re seeing in that space are extremely relevant for the future of organizing.
If we re-examine the essay, towards the end I provided a Wardley map-based look into the future of digital services and platforms. Looking at the map, we can spot five main areas of innovation. These areas will consolidate and “overlap” across different industries: meaning that, for example, a certain protocol that could be used to provide digital identity and reputation, or a software module able to provide certain financial functionalities, will likely exist as stand-alone modules in the market and not particularly attached to this or that vertically integrated value chain or industry.
We don’t have time in this post to dive deep into the five “areas” that emerge in the picture, but it’s worth mentioning that the analysis of the Wardley map tells us that innovation will happen across five major spaces: 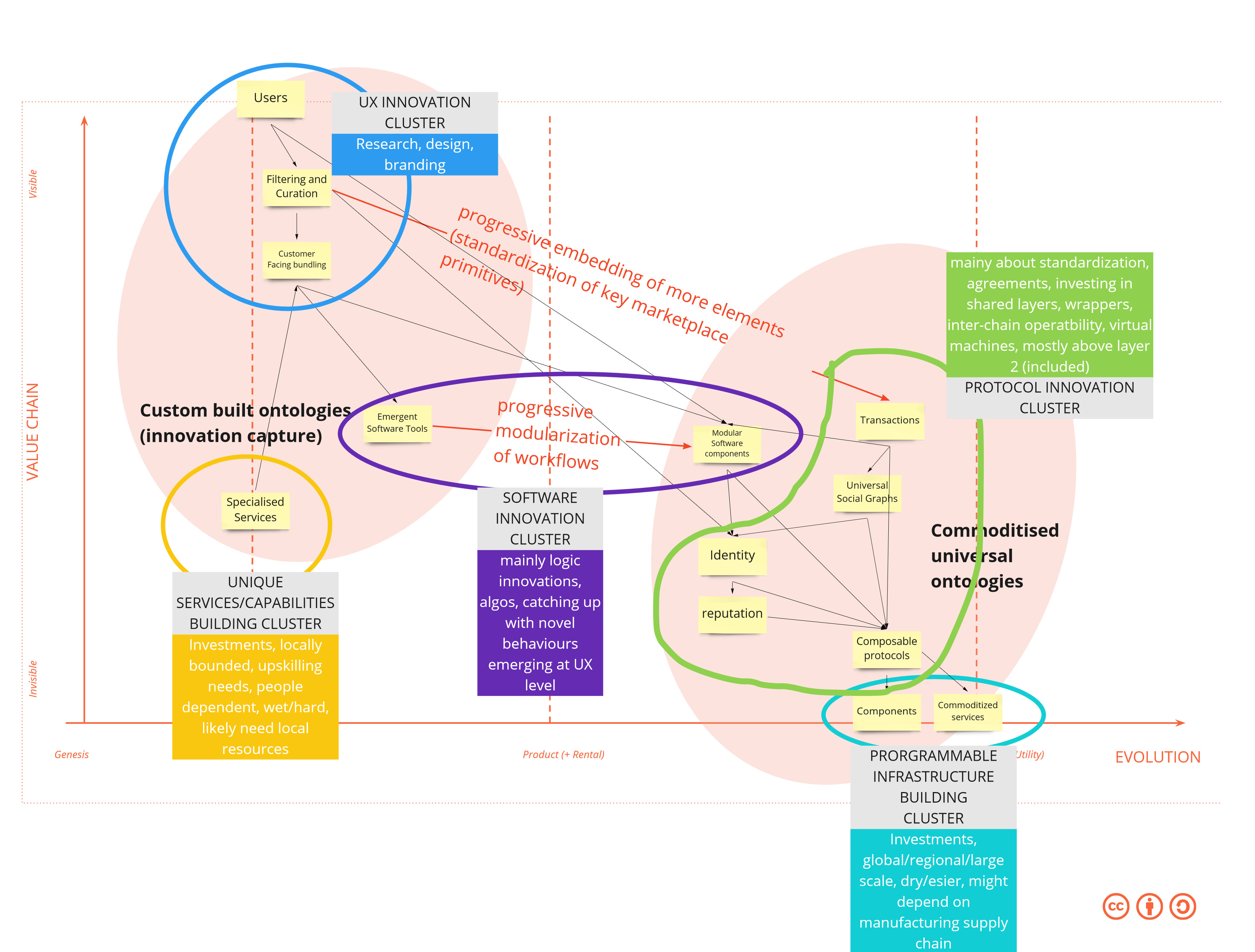 For instance, a marketplace like eBay bundles seller onboarding, seller analytics, buyer onboarding, buyer decision support, search functionalities, and exchange infrastructure. All these components will be unbundled in a Web3 world.

Sangeet Choudary – “Web3 and the revenge of the long tail”

What does this emerging landscape mean for organizations?

The first point that organizations need to ponder – in this setting – is that value capture with complex products that embed a lot of assumptions on usage patterns becomes generally harder. As layers and components unbundle and modularize, it’s harder to exert lock-in in the form of network effects or data lock-ins. Network effects will accrue more and more at the protocol layer where the ontological convergence is stronger (meaning that a larger number of users agree to use the domain abstraction that has been hard-coded into the protocol), and data will be increasingly transparently stored on-chain and managed by data unions.

The balance between products and protocols though is still an open question. Recently, Variant Fund’s Jesse Walden – that originally wrote a piece advocating that protocol should actively commoditize the product layer by subsidizing it – advised that – in a different turn – products may end up forking and reintegrating vertically the protocols (which is exactly what I’m seeing happening with some of the companies I’m working with in web3).

In pondering this take though, we must entertain a key point: by forking a protocol and reintegrating the fork into your product vertically you lose (unless your team commits to continuously catch up with the protocol evolution) the ontological convergence that the protocol embeds (its domain model, its abstraction of reality) and the inherent agreement that all the other users of the protocol have on its ontology. As a result, you’ll end up reducing the composability of your own product.

In a perspective of growing nichification, over the long term, users will exert pressure to be able to roam across products, self-integrate, and define their own experiences by composing products – this is something that Packy Mc Cormick wrote recently in his post “Intertwining Threads”. 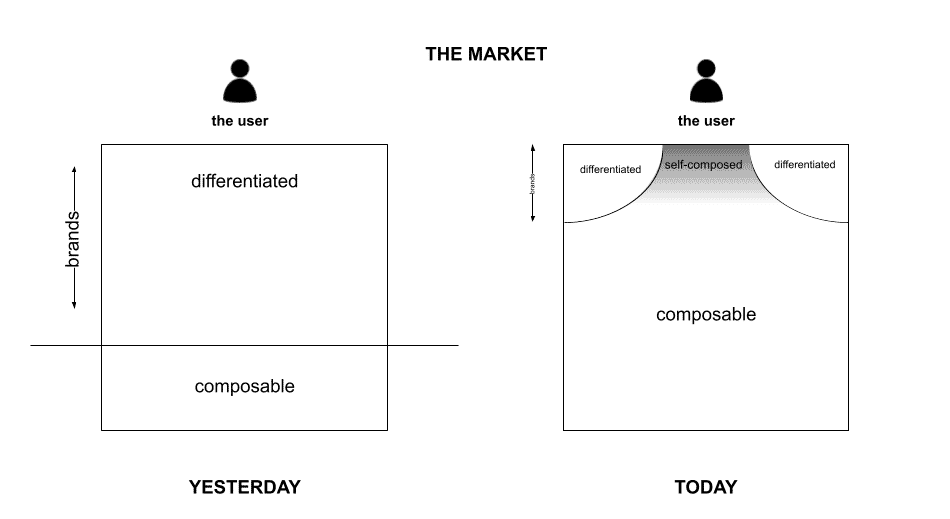 In another key piece from Denis “Jaromil” Roio that I recently enjoyed reading, The Real Crypto Movement, he points out that:

“Operating in crypto does not mean “freedom” […] but a shift towards a new trust model in provable computing that dematerializes infrastructure into code. The quality of code becomes more important than that of the infrastructure and, from a labor perspective, developer roles gain importance towards system administrator ones.”

“The advantage of crypto is not in speed or efficiency, but in a new and generally less risky and more scalable condition of interdependence, trust and liability between infrastructure and applications”

In a way, this means that to really accelerate the impact of web3 at the application layer, one has to trust the shared infrastructure layers. Does the same need to happen between the protocol/infrastructure layer and the domain abstraction that powers them? If this is the case, we’ve to crack the nut of ontological convergence, the question being: how do we avoid continuously reinventing the wheel at the protocol layer and agree on the minimal abstractions that allow us to interoperate?

I may be totally wrong here though and the answer may be more in developing DAO to DAO tooling that allows continuously integrating and rewrapping existing protocol mixes so that apps can use multiple infrastructure layers transparently but still build their own ontologies. Surely more research is needed on this.

As a consequence of such transformations in the market, not only do organizations need to deal with a different way to think about products, and defensibility but also – more generally – move from a management doctrine based on the assumption that “things have to work according to our strategy” into building a management style and an organizational model that rest on a foundation of building optionality, antifragility, and generally being fine with multiple options and multiple outcomes.

The market’s progressive modularization (or, better, the modularization of a larger part of the market) also makes the case for owning pieces “across the interface” – meaning essentially having an influencing stake on the different modules and elements that, combined, make up your go to-market strategy: this will be the only way to exert influence over entire systems.

We’re used to thinking about modularity as relying on interfaces such as APIs but, increasingly, modularity is impacting product features – with Product Led Growth – and contracts. There’s essentially a continuity between interfaces and contracts, and contracts are becoming smarter to acquire the same properties of interfaces (programmability). Smart contracts are becoming more advanced and – as we had the chance to cover in our recent piece on composability and DAOs – practices are emerging to do programmatic joint ventures, shared component development, co-investing, and potentially also programmable market revenue distribution.

So: what capabilities should be built in the organization as we progress into modular and composable markets?

Generally, organizations will need to be more friendly to the idea of becoming investors (in their own teams and in others), and builders (of components): expect organizational forms to polarize between small, team-driven, ventures – mainly building products and growing through Product Led Growth and – on the other end – ecosystemic venture builders (3EOs).

We’ve already found good examples of organizations evolving in this direction: a great example is certainly Haier with its Rendanheyi, but Amazon, Ping An, Flagship Pioneering and others are already paving the way. Such organizations will:

In the picture below, the green color represents a 3EO exerting different control levels on the different modular ventures: the greener, the more controlled, with the red and the blued being integrated as components. Some customers will build self-composed experiences, as others will access brand-built scenarios. 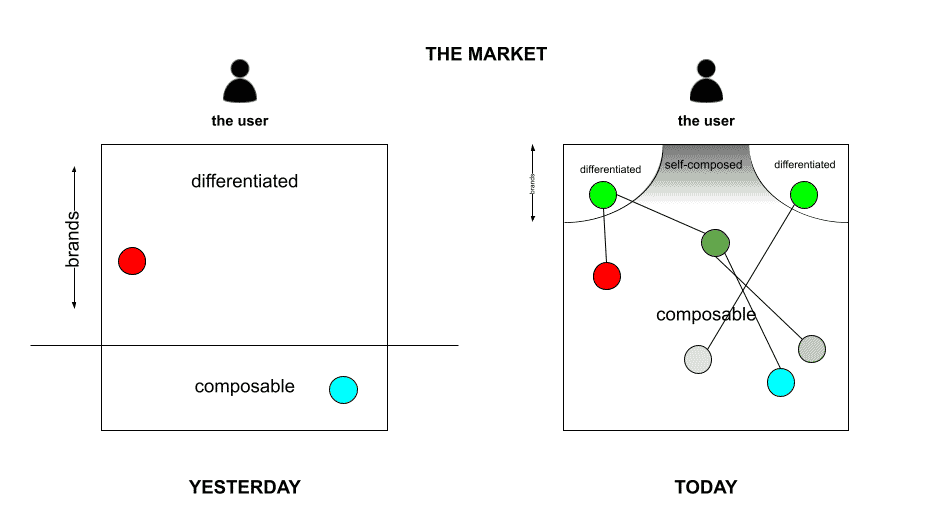 To achieve this capacity, organizations will need to empower the edges in terms of defining the enabling constraints through which delegation and autonomy can happen, giving access to the capital needed to explore and prototype, and generally reduce bureaucratic mediation as much as possible to zero.

As we had the chance to underscore already, the Boundaryless 3EO framework, based on Rendanheyi, seems a perfect fit:

Multiple experiments emerging today in the DAO space also seem to reinforce this direction: besides the DAOtoDAO tooling emerging from PrimeDAO and featured on our latest post on the topic (such as Prime Deals, Prime Launch, Prime Pools… or proposal inverter) also other DAOs are building significant work in this space: I’m thinking for example about Orca Protocol DAO experimenting with the idea of Pods. Pods are modular organizational components that are subject to administering certain organizational capabilities through a delegation framework similar to Yearn’s constrained delegation, where teams are awarded certain areas of responsibility and maneuver space in financial terms.

Orca Protocol is an extensible and modular DAO implementation, built around small working groups called pods. Each pod has a Gnosis Safe multi-sig wallet, which is controlled by the pod members through a proposal-approval mechanism.

Certainly, questions still abound when we think about the evolution of markets towards modularity. In particular, we have to await more experimentation with composable business models and ontological convergence at the protocol level. The frictions between protocols and products – that the quoted conversation with Jesse Walden anticipates – are an expression of it, and the mechanisms to ensure intentional cooperation between players to avoid continuous wheel reinvention is still to be discovered. Another direction that the market could take would see the emergence of smart ways to make interoperability work at the interface, with wrappers, and connectors – sort of smart adapters following the idea of the one we see below. One thing is certain: organizations can’t wait anymore and need to start adapting their operating models to be less of a bureaucratic monolith, with strong convictions about what their users should be consuming: facing a modular and composable market with such a posture would exert a dramatic toll on the organization in the long term making it unsuitable for competing.

Do you want to learn how to create organizations that can fit with modularity and composability?

Join us at the upcoming 3EO Masterclass in September: 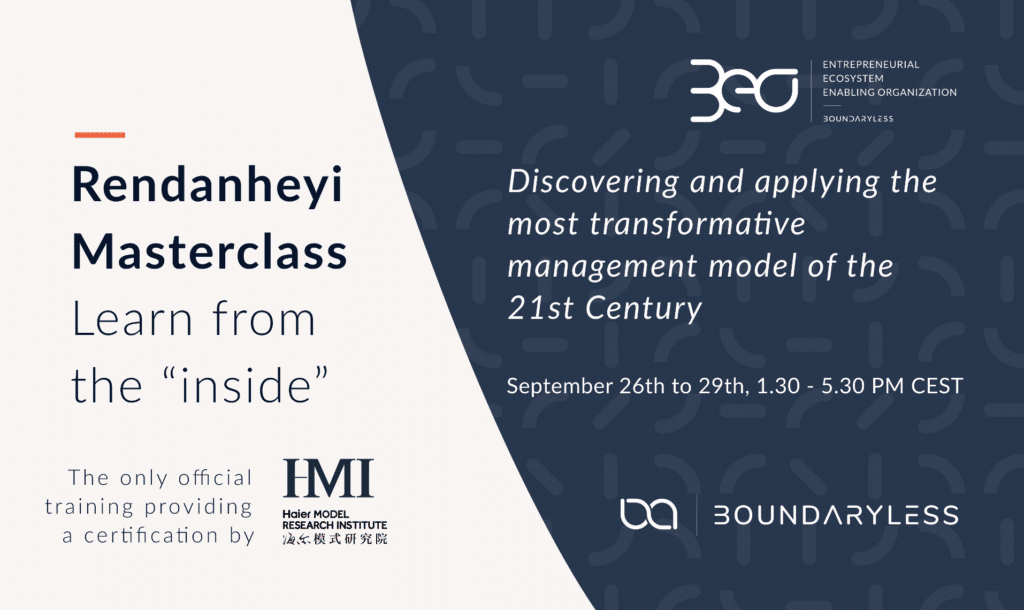 As you may know, everything we do is released in Creative Commons for you to use. In case you’re getting value out of these reads and tools, we encourage you to share with your friends as this will help us to get more exposure, and hopefully, work more on developing these tools.

Are you interested in our help in understanding more of the topics discussed in the article and how they can impact your organization's strategy?